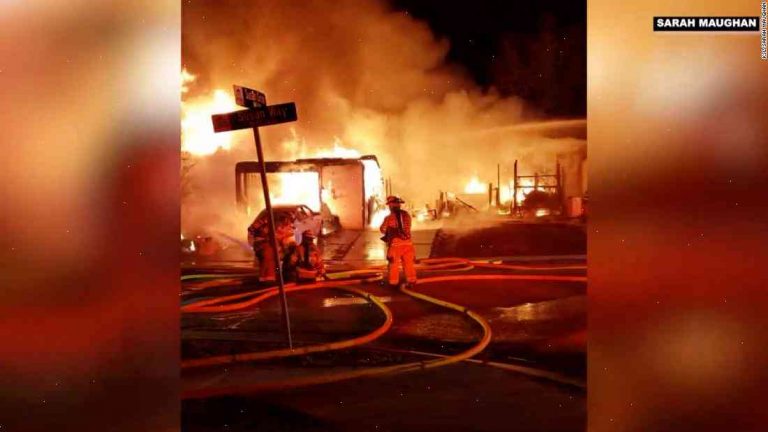 A baby nephew was holding onto a baby girl when their mother managed to rescue her from a burning home in Essex on Saturday.

Sue Forsyth was visiting the Southend home when she heard an explosion at about 11.45am.

She ran outside, struggling with a wet baby and a badly burnt but alert infant.

No-one was injured in the blaze but it has been confirmed that the home was uninhabitable.

Ms Forsyth, a Greater Harrow councillor, said she struggled to hold the baby, which at the time was “greasy” and “wrenched” from her while trying to rescue her nephew, now two, who was trying to get a hold of the baby girl.

“He was just all snotty,” Ms Forsyth told Sky News.

“I got up into the room and there was a lot of smoke, the air was foggy, and saw the flames and knew the house was going to catch on fire.”

She said she tried to stop the flames but couldn’t hold them back.

“I think this is the bravest thing I’ve ever done,” she said.

It was so hot that she had to put her arm through a window before stepping out.

“It was weird. The water in the house felt heavy,” she added.

Ms Forsyth said firefighters found she had been holding the baby.

“He said he had seen her when the fire had happened and she had actually tried to grab the baby back and she had fallen to the floor and he had grabbed her and got her away from the fire.”

The woman’s firefighter husband, Tim Forsyth, said: “Sue is my rock, I couldn’t do what she’s done.

“She’s a really brave woman. My wife in particular. I don’t know where she could’ve got the strength from – the energy and the courage to do it.”

He praised the fire service, saying: “I think what an amazing fire service they are, the crews are top.

“There’s quite a few of them over there and they were phenomenal.”

Shea Fowler, the man’s uncle, said: “We’re just so proud of her.

“The fire crews did a tremendous job and Sue does what we never see – she was brave enough to jump out of the window and then got in the car and got him to her house where she did the rest.”

A spokeswoman for Harrow Council said the home had “essentially been destroyed” but fire crews were “working to make it safe”.

Harrow Council said it had “fully co-operated” with a report from Kent Fire and Rescue Service to improve fire alarm systems in the area.

The number of crews at the scene was reduced after a row over the timing of a fire alarm cut it short at 10.40am.

Harrow Council said the reason for the delay was a “technical issue” within Kent Fire and Rescue Service’s appliance.

Officials said the alarm was “technical” and unable to be turned on for more than four minutes.

A spokesman said: “The force was immediately notified and were deployed but it was later agreed that the option of entering the property was unsuitable as emergency ventilation through doors or windows is impeded by smoke.

“Instead of entering the house, firefighters acted quickly by checking the exterior of the property and checking the exit route as the rear of the house was structurally safe.”

The report, written by Harrow Council fire and rescue service, urged local authorities to improve their fire alarms and cover all open windows and doors within a designated safe area.

Image copyright Getty Images Image caption Police are investigating the fire, but say there is no evidence of a deliberate start

The council has also now advised local authorities to proactively try to identify buildings in high-risk areas that are “well-covered” with smoke alarms.

The fire is believed to have started in a heating system.