This post is part of our Digital Literacy series, which is presented by the World Bank Group, the World Food Programme and the General Directorate of Food Aid. In early morning Africa time, the… 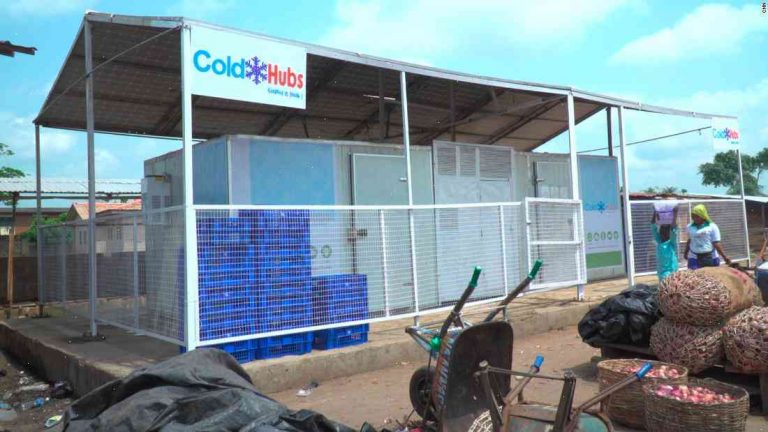 This post is part of our Digital Literacy series, which is presented by the World Bank Group, the World Food Programme and the General Directorate of Food Aid.

In early morning Africa time, the red, unkempt cargo wagon pulls up to a vegetable field in Akwa Ibom State, located in the heart of Nigeria’s oil-rich southeast. The wheel locks, the wooden frame is fixed to the ground and clatters as the wagon finally pulls into position. Inside the cart lies a range of vegetables and fruits produced that morning at the farm, under the care of the Country Director of the International Institute of Tropical Agriculture (IITA) Nigeria, Reginald Okon. The produce is by far the biggest food item that can be moved on such a cart, which costs a fair sum of money to buy and use; so IITA Nigeria developed the ColdHub.

Currently, the ColdHubs in Akwa Ibom, are used primarily to transport food, which had been transported to Akwa Ibom State last year by road, and are simply not cost-effective. “Agriculture in Nigeria is quite diverse and we often have two or three different items in a same basket,” Okon explains. “We need some kind of multiple storage solution to collect the products in one location and process and de-stuffer them in one location so that the final product can be delivered to the market on time.”

Two years ago, the Blue Ocean Foundation, an environmental organization that supports projects in developing countries, approached IITA Nigeria with the idea of using solar to construct several ColdHubs in Akwa Ibom State. In 2014, the organization used about $49,000, which it raised through private donations and foreign government aid, to form the project. The partnership between Blue Ocean Foundation and IITA Nigeria eventually prompted other NGO’s, like ICK and International Alert, to approach IITA Nigeria with similar proposals. For energy-intensive crops like the vegetables grown in Akwa Ibom, climate change and population growth and rising food prices are put at risk due to chronic food insecurity and famine, as many of the poorest and most vulnerable in societies live off agricultural exports. Two years after the establishment of the Cool Hubs, six states in Nigeria are connected to the IITA Nigeria’s long-term storage solution. Within this space, farmers have the opportunity to learn and take classes on managing their farms and the demand for their produce. “We know that the farmers in the State of Akwa Ibom are very productive and we are now having the opportunity to take them out of the market,” Okon explains. Once their produce is gathered and packaged, it will be fed to the IITA-run schools in Akwa Ibom. IITA Nigeria is working to form cooperation agreements with other NGOs and farmers within Akwa Ibom to build on the knowledge they have gained in the state. This strategy, Okon says, allows IITA Nigeria to promote sustainable agricultural practices and lift families out of poverty. “What we’re trying to do is to establish a long-term national agricultural storage facility in Akwa Ibom that will allow us to increase farmers’ income and minimize food loss and crop failure,” Okon says. “This is a major challenge in Nigeria, as food is a global commodity and it takes about a month from the time the food leaves a farm to the time it reaches a consumer’s table. You have to manage your supply chain very well to be able to prevent food loss and you do that by storing your food efficiently.” These days, the hubs are used primarily to transport vegetables from farms and then to an area of IITA-supported schools. Seven different farms have been connected to the system since it began six years ago; between the 15 and 20 farmers working on these farms, there are nearly 18,000 students enrolled in IITA-supported schools. Last year, one of the ColdHubs was permanently opened by IITA Nigeria in Nsit Atai Island, Uko-Akwa Ibom State, which served about 1500 elementary, middle and high school students. Today, IITA Nigeria has plans to open more ColdHubs in the state in the near future. A total of eight ColdHubs are currently operational in Akwa Ibom State and at least one will be opened in each of the other six states within the state over the next two years. – Deepti Hajji