Kasiele Kuol was walking with a group of aid workers and locals near his hometown of Doma in South Sudan’s Equatoria region when a surge of water swept through a river. “The water was… 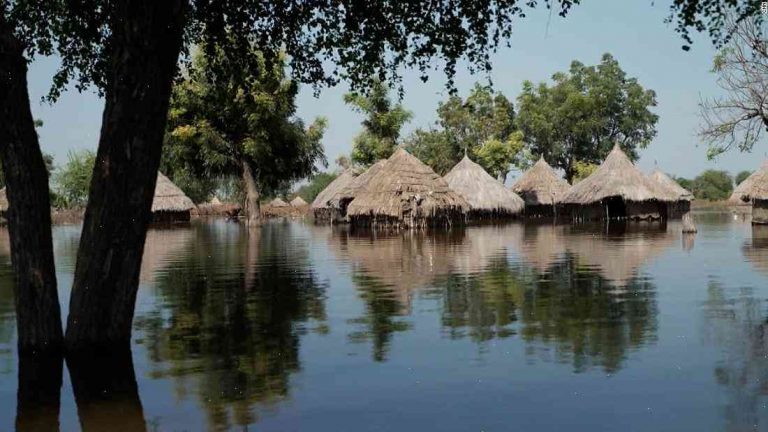 Kasiele Kuol was walking with a group of aid workers and locals near his hometown of Doma in South Sudan’s Equatoria region when a surge of water swept through a river.

“The water was rushing across; it was just flood after flood,” he said.

They had left Doma the day before to deliver medical equipment to other local clinics after a recent round of fighting, but fled back in time as a 6ft (1.8m) wall of water swept through the area.

The group of 35 aid workers joined up with other thousands of people fleeing from homes in the region in response to South Sudan’s worst floods in memory.

More than 80,000 people had been displaced by the disaster alone, UNICEF said.

Mr Kuol and the other aid workers stayed back in Doma after assessing damage and where other health workers could be sent. “We’re seeing a lot of health problems, a lot of flooding of the water,” he said.

The UN’s World Food Programme estimates that 1.4 million people in South Sudan need food aid, and a lot more in the future if a battle over funds threatens to derail a recently agreed $1.4bn (£960m) global aid appeal for the country.

About 4,000 people were killed and a few million people were displaced in what has become Africa’s longest-running civil war.

Thousands of ethnic groups in the country have taken opposing sides in the conflict.

The new floods are unfolding in the impoverished Equatoria region, which has often been spared the worst of the violence in the country, where there is often no spare food for the children at risk of famine.

Accompanied by local aid workers and wary of another influx of water, Mr Kuol said one group they had just left had lost their entire food stockpile and were stranded.

“They can’t move because the river is still high,” he said.

So on Friday, the group organised to leave Doma for their own safety.

“They know that if they stay there they will die,” he said.

Thousands of people have risked their lives in the desperate attempt to flee to higher ground in other parts of South Sudan.

Some have pushed a dugout canoe through water coming up to their waist for several kilometres, making the journey to the safety of a small strip of open land by the side of the road, or into deeper water.

One father in a rubber-biked taxi explained that his 10-year-old son had escaped with him, after pretending to wait for him at home while one of his older sons went to a neighbour’s house to fetch tinned food.

Another man managed to clamber on to a plane he managed to find and make it as far as the US Embassy in the capital, Juba.

The flow of water was not limited to just the north of the country.

This week, even heavy rains that would normally fall along the Nile River in Juba were unable to stop its flow into towns along the southern coastline, where parts of the city and its surrounding villages were underwater.

In one camp sheltering more than 25,000 displaced people, Nyor Anun, water had already seeped through open ground slabs and into shacks in the riverbed.

“We were going to sit and watch it this afternoon, but this morning it was too bad, so we just came here,” said Lu and his six young children.

Across town in a much bigger camp for the displaced, Dzikle, 63-year-old Ignatius Nyor gathered firewood outside, wrapped in the white garment that served as a sign of charity, and donated to others fleeing from their homes.

So far his experiences as a refugee in Uganda have been far from inspiring, he said, but he showed few signs of sorrow as he cut wood.

“Right now it’s just houses, there’s nothing else, but that doesn’t matter,” he said, seemingly absentmindedly scaring away a quail with the twig he was using to attack the water.

“The rivers will go, then people can rebuild their houses.”