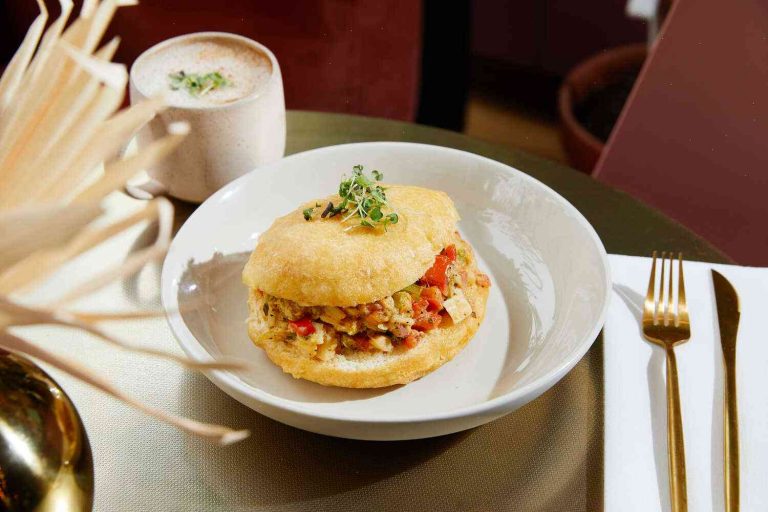 Housed in a former roadside cafe

Wayne and Grace Maguire were 18-year-old kids with bulging hips when they came to New York in 1969 to pursue their dream of becoming much-hyped (and unrewarded) rock musicians. In their absence, an aunt gave birth to twins, resulting in the grandfather that they would later adopt. “The mother had stopped taking drugs, and after that, it was a whole new world. She went to college. She had a car. She’d never had a job,” says Zelda.

Over the years, their three daughters and their two sons came and went, and now the once family-run operation has turned to a career in food and nutrition education. It occupies a simple, five-storey loft in Flatbush, Brooklyn. “Like a family house”, says Zelda. “Everything has been collected: silver, glassware, everything, a studio, a classroom.” We are seated on the second floor. The noise of everyone around is surprisingly undisturbed and audible.

We proceed to the stove, where my daughter takes care of the fruit. The small bake-ware, handmade with pomegranate skins and apricot skins, and provided by Zelda, is such a nostalgic pain in the arse when you’re 11 that it’s all too easy to forget the positive effect you can have.

We are served a lovely salad of baby carrots, swiss chard and button mushrooms, with toasted hazelnuts, feta and sweet and sour sauce. The goat’s cheese has been salty, and the bread appears crisp, almost sour, with a crunchy crust. Our sandwiches are filling. The pepper jack, mustard and onion is okay.

The paté (and chips) is runny with meat, wasabi and poblano chilli, and it has the consistency of a makeshift hug, dotted with garlic oil. The clams are decent. The clams are soft and tasteless, almost unadorned, but the garlic oil is so good, and even though they are drowned in horseradish, their underlying flavour is still totally rewarding. The red cabbage is sweet and crunchy. The herb lettuce, fresh and lovely in every way, is topped with rocket, roasted red peppers and a fresh chilli salad, and is a worthy accompaniment. The lemon water made from its own lemon, yoghurt and herbs, and served with a slice of crusty bread, makes you think why you were never hungry before.

My daughter brings out two chutney skewers: a thicker version of vegetable sambal, red cabbage, two slices of leafy green, and the thin, crisp one she has already, and we serve it alongside the chutney on one chip (it is called pepperjack on the menu). The sweetness of the sambal is counterbalanced by the sharpness of the cabbage and pepperjack. The thin chips are bursting with flavour and the accompanying salad, vinegary and heavy, is refreshing. A delicious touch.

Our main courses feature a nice, meaty slab of spaghetti, served with meatballs and vegetables and served with the old chili sauce. The meatballs have been spicy, just enough, not too hot. The small blisters of burnt garlic hover nearby. The spaghetti is the traditional form, but there is a thin pasta shape with the same char so that this is better than its chip. The hot beef is fat, sweet and melting, and is simmered in a beef stock that has invert sauces, topped with a gravy to the side. It is delicious and shows why you should try it.

The service is very good: I notice the children, my daughter in particular, will press their noses into their soup bowls and chew their burgers. They use toy flashlights. Aunts & Uncles is a seriously nice restaurant.

Wayne’s tip: One day, there was nowhere in Flatbush to give apples to the children, so my daughter borrowed a flash light from a local shop. Later, she went in and bought five apples. They were at least as good as the ones from the supermarket.