BBC News Long queues formed outside polling stations in Gambia’s presidential election, as people with marbles in their ears cast their vote. Thousands of Gambians cast their ballot for a new president in an… 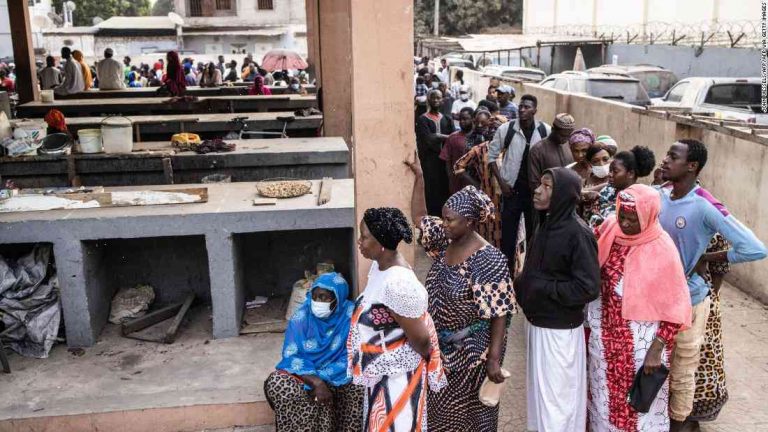 Long queues formed outside polling stations in Gambia’s presidential election, as people with marbles in their ears cast their vote. Thousands of Gambians cast their ballot for a new president in an election that is being seen as a test of the nation’s stability in the wake of former leader Yahya Jammeh’s exit. About 2.5 million people are eligible to vote in the presidential and parliamentary elections. The late leader Jammeh refused to accept defeat in the last election in 2011. Six candidates are hoping to succeed him. Those are presidential contender Dapo Sankaram, together with the runner-up in that election, Lamin Sallah of the Alliance for Patriotic Reorientation and Construction (APRC). Jammeh shocked his critics by stepping down earlier this month, less than a year after winning an election that triggered clashes in the capital Banjul. Failed coup In Saturday’s election, 11 candidates will vie for posts in the Gambia’s parliament. And in the presidential election, more than 200 candidates are running for a five-year term. More than 23,000 police and soldiers will be on duty to ensure order, according to the interior ministry. The vote is being closely watched across Africa by observers from the Commonwealth, African Union and the Economic Community of West African States. The BBC’s Will Ross in Gambia says the fact that there are so many candidates this time means that the outcome is harder to predict, especially as the ballots are being cast using machines.

Profile: Yahya Jammeh But our correspondent says that even if Mr Sankaram fails to win the presidency he could win a number of parliamentary seats. The popularity of the APRC candidate, Mr Sallah, has been rising, our correspondent says. Meanwhile, the country’s West African neighbours have deployed troops to the country to protect the vote. In March, former Vice-President Ousainou Darboe said there would be “no quarter given” for anyone attempting to disrupt the presidential election. During the last election in 2011, Mr Jammeh threw out international observers and more than 100 political prisoners were released. He was declared winner in controversial circumstances, and that was followed by months of tension after he refused to step down. The list of candidates is similar to that of the 2011 election, but one notable omission is northern Mandinka King Kogba, who was among those who claimed Mr Jammeh was over-running Gambia.

StumbleUpon What are these? E-mail this to a friend Printable version

10 facts about Tasers and stun guns